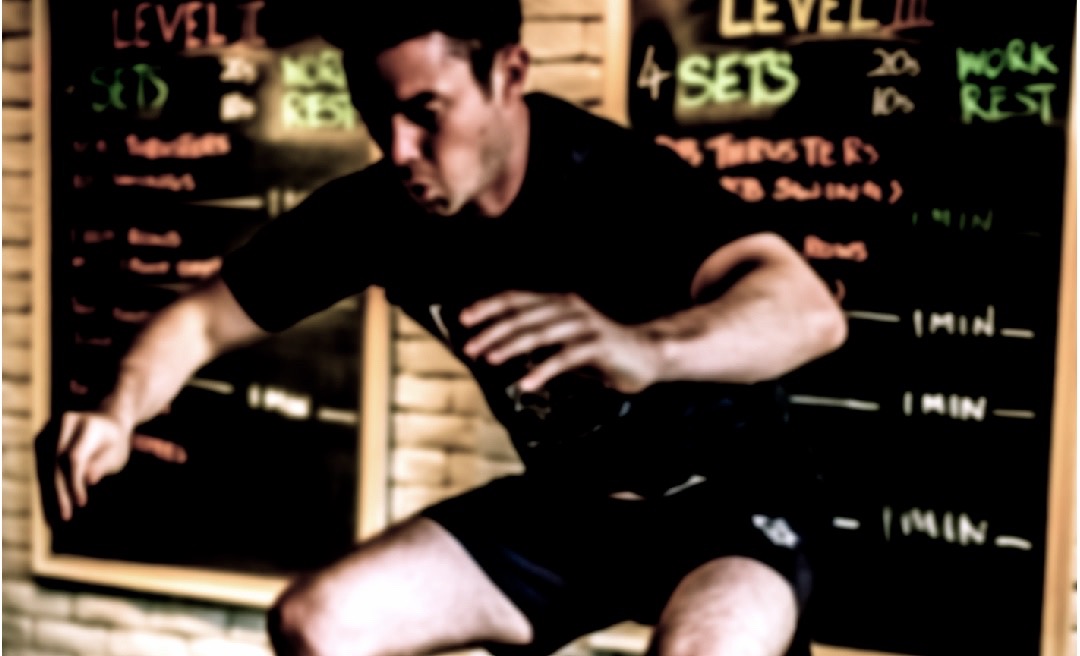 Brad is some superhuman freak and Ian might be a wizard.

I was the everyman. Until 18 months ago I was like a majority of people, I ate whatever I wanted, whenever I wanted – and being English, I drank beer every day. At least a couple of pints – but frequently more than that. But, I also understood that exercise was important – so I exercised.

Or at least I thought I did.

I had various globo gym memberships for 9 years. I would visit these gyms 3 times a week for between 90 minutes to 2 hours – sometimes I’d cycle to the gyms, sometimes I would run (I loved to run) – my fitness would go in cycles.

“Hmmm, I’m on TV, I should probably get in shape”

I’d go to the gym, do some dips, do some arm raises, do some chin ups (but they were hard, so screw that), I’d DEFINITELY do some bicep curls (who DOESN’T want big muscles on their arms? – cue stupid biceps), but of course I would get on that bench press and lift stuff – grrrr, I’m all manly and shit… look and me lift stuff.

This would go on for 4 to 5 weeks – and I would get some results, sure. My biceps became stupid triangles, my chest would get bigger, my shoulders more defined – so, I’d ramp up the weights.

Then, EVERY time…. I’d pick up a back or neck injury.

The worst had me stuck naked on the floor for 4 hours until a Dr could inject muscle relaxants into my back.

I would then be out of training for 2-3 weeks… and we’d start the whole stupid cycle again.

Don’t get me wrong, I wasn’t out of shape – I could easily run 10 kilometers, I could lift a manly amount of weight on a metal bar but no matter how many special types of sit ups I did I was never getting that body shape that I wanted – 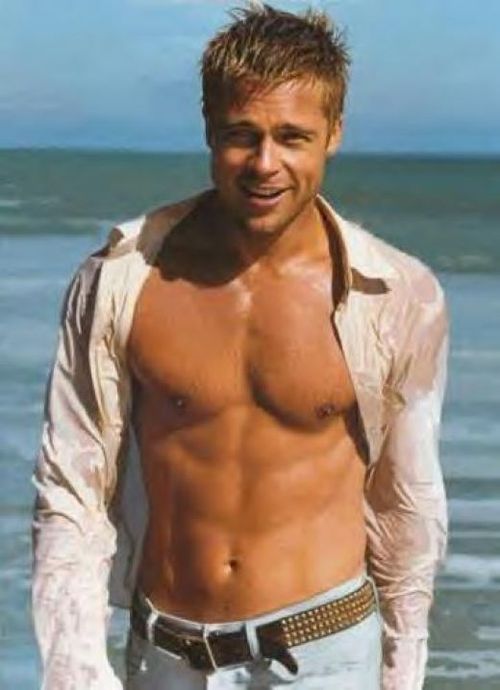 But I was cursed. CURSED I TELL YOU – Cursed by bad genetics, because how can it be possible that I could train for 6 hours a week and run 10 kilometers with my eyes closed and not look like that?

Bastard genetics. Fuck this, I’m going to the pub…… with Brad.

The most unhealthy and out of shape I have ever been was when I met my heterosexual life-mate Brad Robinson.

For about 3 months, we hit the pub EVERY day (sometimes from 11am…… to CLOSE)

We single handedly kept Mabuk Monkey (alcohol delivery) in business – so much so that we have orders named after us:- The Oli (18 Heinekens), The Brad (36 Heinekens) and even one that they created The BrOli (54 Heinekens).

When Brad and I visited Beer Fest the Mabuk Monkey guys ran over to us to take pictures – we were alcohol celebrities.

And then there was the food, pizza has tomato on it – so it’s healthy right?

I ran today, I EARNED this burger.

Did you see me lift today? Ice Cream this fucking He-Man.

Until, one day… I lost my soul mate.

Brad decided he was gonna lose some weight (yeah, right… good luck with that one chief)

Right at the beginning I found it weird to see Brad eating egg whites and vegetables as I destroyed Pringles and beer in his apartment – I figured sooner or later he’d come back to the dark side… but persist he did.

Fast forward a year, and we’re in Boracay with our stupidly pretty Pinoy friends – Brad is now quite literally half the man he used to be, and I’m still me. 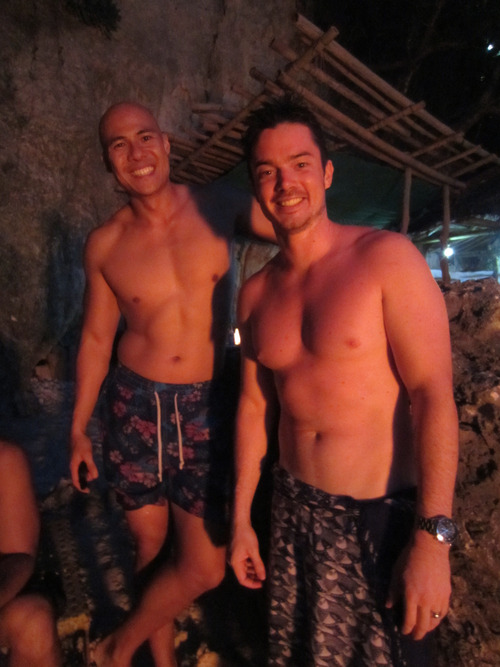 Here’s me and Kojak.

And suddenly I realised I’m a month away from 31.

I had ALWAYS told myself – I’ll be in shape in my 30’s… and I realised I had broken my own promise. I’m a man of my word, and this bothered me.

I talked to Brad about this – and he said, verbatim “If you would just do what I tell you with food, you could achieve your goals in 8 weeks – you could do a shirtless shot”

So began my fitness journey – motivated entirely by shallow reasons. Holy shit. for 9 years I had struggled. But, by listening to everything someone better informed than me said for 4 weeks I achieved something impossible (or so it seemed).

SO… how far could this go? I had trained my ass off during that 4 weeks (the traditional Oli way) – but I still didn’t look like Brad Pitt.

What if training worked the same way? What if I just gave my life over to someone who knew their shit better than anyone?

Ian likes a project. So my challenge to him was:- I have 6 weeks before I shoot a Men’s Health cover. Can you make me freak people out.

After a quick 2 minute discussion about my training he said “Yeah. but stop doing absolutely everything you are doing. You’re doing it wrong.”

He was about to leave to competitively put weight over his head with Russians in Japan for 2 weeks (he’s a weird dude) so he told me to do nothing but sprints and chin-ups while he was away, and he left.

Truth be told he didn’t believe I’d actually do it.

My wife went off for a 2 ½ week trip to the USA and I just ran up and down hills and did chin ups.

He totally changed how I trained. Instead of 3 sessions of 2 hours, it was 2 sessions a week, for about 45 minutes with at least one 20 minute sprint session on my own. You think my back looks 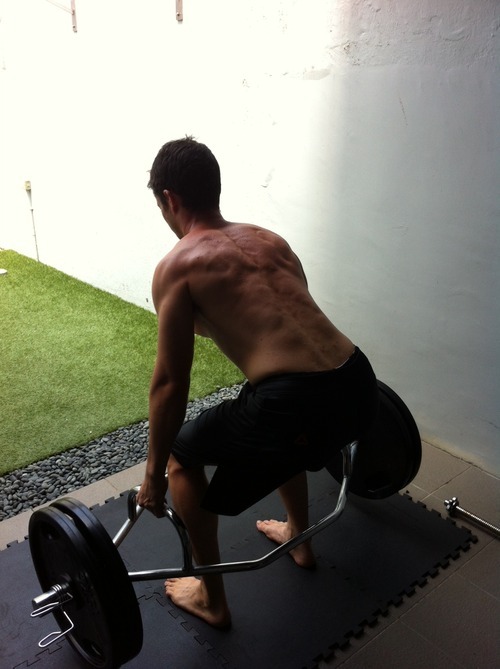 Now sure, that is me lifting weight on a metal rod.

But 99% of the stuff he had me do was:- Jump up and down, lift myself up, swing a kettle bell, do burpees, life weight over my head and slam medicine balls.

After 4 weeks, and 8 sessions with Ian… shit had gotten real. 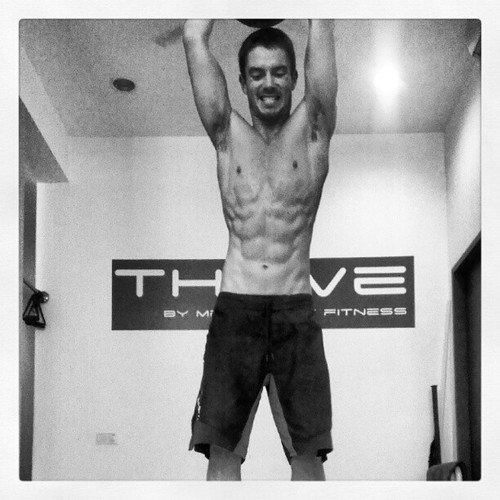 Yeah. What the fuck.

This was my cover. 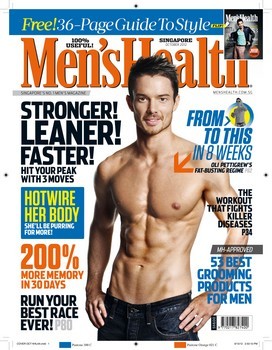 Now, here’s the point of my whole blog:-

I got into this fitness thing to achieve a goal. It was a 6 week project I did for purely aesthetic reasons.

I fully intended to hammer the shit out of some burgers and beer once my shoot was done.

I had never, EVER felt this good.

I used to drink to feel good.

I used to eat pizza to feel good.

I had NO IDEA you could feel good ALL THE TIME.

I got into this fitness thing for shitty reasons. But I discovered fitness and health because of it. I am no longer the person I was, and I don’t mean that physically.

Brad and Ian saved my life.

I use myself as an example here, not to brag – it’s to show that ANYone can do this. The ‘impossible’ is actually just that we don’t know what to do.

I can still remember where the idea for Ritual came together. Ian was going back through my training records after Brad and I finished a session, and he realised that I had only trained 8 times.

We didn’t believe him… but a week later, Ian sat us down with a white board and an idea.

2 ½ hours later 90% of what you see today in Ritual was on that board.

YOUR fitness is there – just trust people that know more than you.