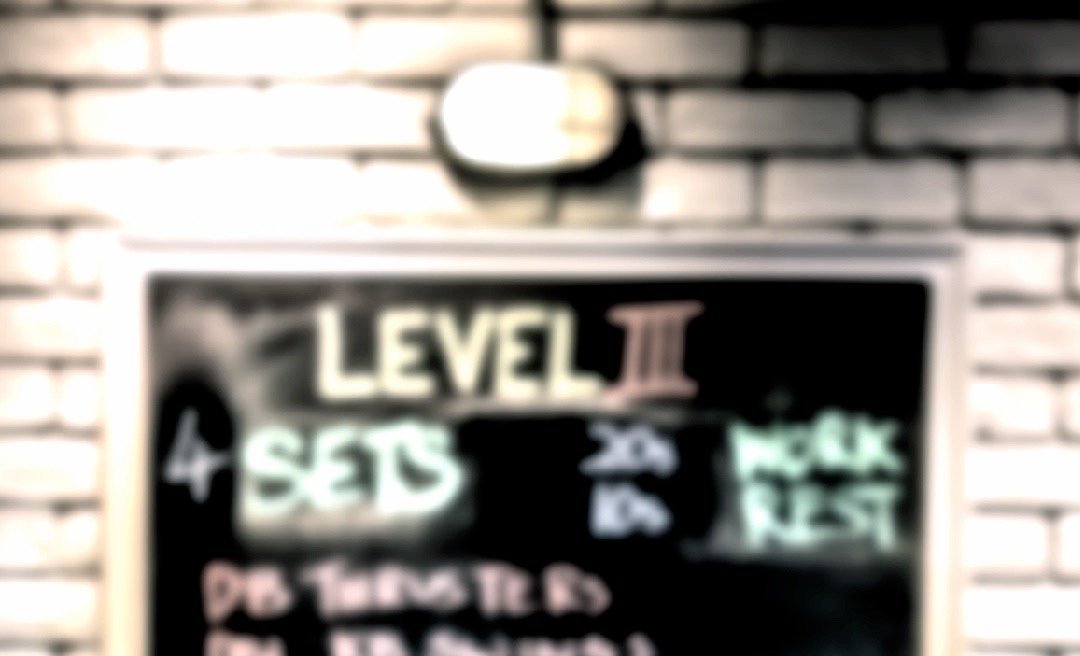 April 21st 2008 was a momentous day in my life.  Walking into the operating theatre to be there for the birth of my first child, Garrett.  What a special day – mommy was nervous, daddy was a wreck.  She badly wanted a natural childbirth, but the little man wasn’t cooperating.  I didn’t care how he came out of there, as long as he was healthy.

The hospital has a holding area; you get scrubbed up and sit down in this little area waiting to be dressed with the appropriate attire before going into the operating room.  It’s a strange place – I thought the little chairs they put outside of the fitting rooms in department stores were the worst places for men to hang out, this place was way worse.

Finally a nice lady comes in to give me my hospital gown – “I’m a big guy, grab the largest thing you have.”  She looks up and sheepishly hands me a gown, XXL.  I try it on, and it’s not even close to fitting me.  She has to get special permission from the surgeon to allow me in the room without the appropriate attire – luckily this is Asia, so I got in without having to rip the doors off or threaten anyone.

That day burned itself into my memory banks – 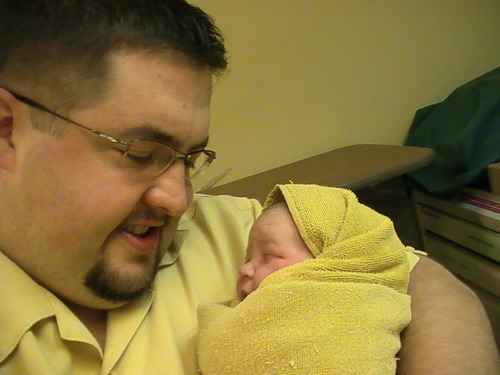 I was used to being the biggest guy in the room – I’ve always been that Oklahoma corn-fed alpha male type of guy.  However, now I wasn’t an athlete anymore – I was morbidly obese and probably on the verge of having diabetes.

I didn’t know what to do – so I turned to what I knew from the American football and wrestling days – lifting heavy things. I’ve always been good at lifting heavy shit – always, still am.

I joined a globo gym near my house – knowing exactly what I was going to do.  I would work the same methods as I did all through my younger, athletic years.  Monday will be chest and triceps, Tuesdays back and biceps, Wednesday will be leg day (never skip leg day, kids) etc etc.

I walked into the gym and arrogantly asked for the biggest personal trainer they had.  I couldn’t have some skinny Asian kid trying to spot me as I went for my one rep max.  Out came a guy they called Shrek, we shook hands, talked for a few moments, and I hired him as my personal trainer – more on him later.

A few months had gone by and I was lifting big again, and it felt good.  It was feeding my ego (note alpha male comment above).  I liked being the guy overhead pressing two 55kg dumbbells while everyone else stared.  They were dusty – because nobody had touched them since I did last week.

My body started to transform – and at the time I was pretty happy with the results.  I got so convinced I had this stuff figured out, that I dropped Shrek and started training with some fellow meathead guys I’d met in the gym.  Shrek wanted me to do more cardio, less heavy lifting and more reps.  pffft.

Looking back now, I was clearly compensating.  I was still fat – but now I’d packed all this muscle underneath the fat.  At almost any time of the day, no matter where I was – I was the strongest guy in the room.  At the time, that was enough for me. I’d done nothing to change my lifestyle, I still ate like a 14 year old, and drank like a sailor – but looking back, it was the first step in a long process.  If I’ve learned anything – it’s that there’s no endgame in fitness.  There’s no result – it’s a constant, ever evolving process.  A journey not a destination.

“Hey man, you want to go watch some banker assholes punch each other?”

18 months had gone by since I’d started lifting again – and I treated my corporate team to a night out to see some White Collar Boxing.  We bought a table, and enjoyed course after course of food – and bottle after bottle of wine.

I’ve always had a draw to combat sports – always.  Every Tyson fight, every UFC, I even liked K1 when no American could even spell it. Ego and alcohol were in full effect as I watched these guys get in the ring and box.  I kept thinking (man, I could do this – I could win this).

A few months later, while drunkenly playing poker I met a guy who had done a white collar fight the year before.  I made an off the cuff comment about wanting to try it out.  Not long later, the phone rang – and I got my chance.

I walked into a boxing gym to meet the promoter, who immediately asked what I weighed.  I honestly didn’t know, hadn’t seen a scale in a long time that went over 120kgs.   He walked me over to the scale, and it finally stopped moving up at 145kgs.

Now, I’ve never been much for losing – or being told I couldn’t do something.  Without hesitation (and truthfully, without any thought) I argued back.  “I can make 120 – if I make 120 you’ll give me a fight, correct?”  I also do a lot of negotiating in my job, and as you can see by the structure of that question, the easiest thing for him to do is say yes.

The next day I walked into Fight G MMA Academy, and met the owner and head coach, Darren De Silva.  I explained to him my situation, and he asked me to lift my shirt up so he could see my belly.   “Can be done, but you must do everything I say for the next 3 months.”  I did, and more.  All I cared about was proving to that asshole promoter (who is a fantastic guy, but at the time it was part of my process) that I could make the weight.

I started running – I’ve always hated running.  Even as far back as junior high football I’d always do anything to avoid running, I’d be late to practice to miss the distance running part.  I didn’t necessarily mind the work, just hated running.

Desperation sunk in after my first run – I made it a couple of hundred meters and had to stop.  The next day my feet hurt so bad I could barely walk, but I still had to go to boxing practice and skip rope.  There’s no reason for a guy at that weight should be skipping rope – it isn’t a pretty sight.  However Darren told me to do it, so I did it.  Every day – I did it.

I started reading, started manipulating my nutrition in order to cut the weight.  Get rid of carbs, that’s what all the forums say. That’s what I’ll do.

Weight started to come off – quickly.  Then it slowed down and I didn’t understand why (more on this later).

However, I made it – I stepped on the scales at exactly 120kgs 3 months later at a public weigh in.  I really thought I looked good then, at 265lbs. 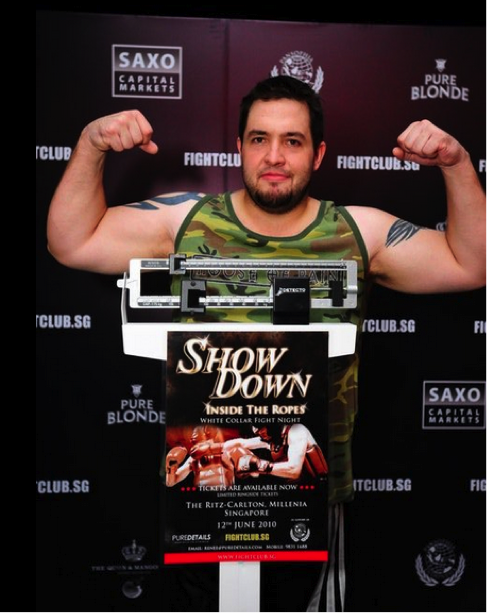 I’d made incredible changes to my body – but the mind has an amazing way of telling you look better than you do, or worse than you do.  It’s something I still deal with to this day. 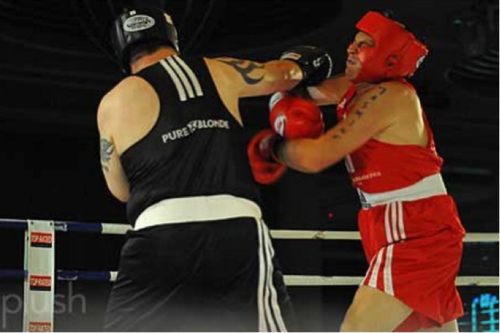 I went on and fought, KO’ing my opponent early in the 2nd round.   The crowd roared – and my hand was raised in victory.  I haven’t felt the glory of working your ass off at something physically taxing and winning in many years.  I forgot how fucking spectacular it was.  At the time – there’s nothing that can top it.  You are king of the mountain; you dominated someone who wanted to hurt you.  You are the man. So now that I’d found the secret sauce of weight loss, I took some time off to recover from the training and enjoy alcohol and carbs again.

I realized at that moment that the only thing that is going to keep me in shape is the concern of being punched in the face at a later date.  I needed to get back into combat sports.

I went back to Fight G and met the most ridiculous human being I’ve ever met.  Eduardo Bezerra.  Eduardo is Brazilian, and a brown belt in Jiu Jitsu.  He lives the life that most people would dream about, surfing and teaching the gentle art.  He introduced me to Brazilian Jiu Jitsu – and I was immediately hooked.

Years later, with plenty of ups and downs, I’m now a professional mixed martial artist, and am co-founder and CEO of Ritual.  I have dozens of shiny trophies and medals to show for all my hard work in martial arts.  I even have a big beautiful championship belt that I had framed; I thought I’d put it up in my office, or even in my living room.  All those things sit in a storage room collecting dust, not proudly on display. 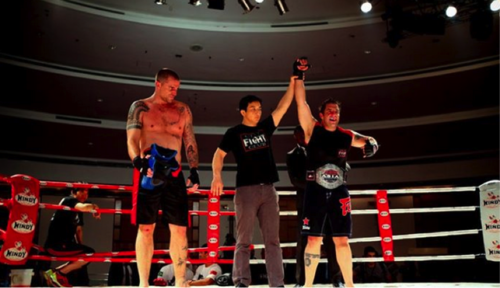 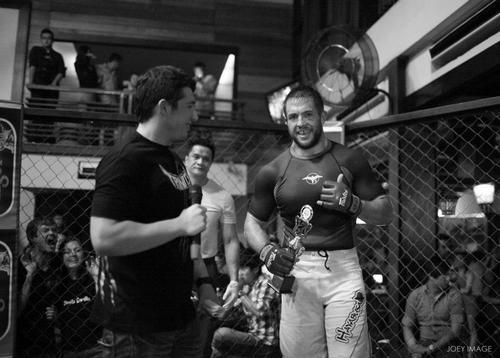 I can’t figure out why I’ve never put them up, and why I’ve lost the desire to –

What I also have to show for it is a resting heart rate of 37 beats per minute.  Size 32 jeans (I was wearing 54’s at one point) and now I can take off and run 10k on a whim.  I’ll be 34 this year, and I’m no longer the strongest guy in the room – but I’m almost certain my body now performs better than it did when I was 17 years old.  34 year old Brad would be able to kick the shit out of 21 year old Brad.  My body is where it wants to be.  I know how to tweak my nutrition and training based on my goals at the time.  I move better – way better.  I have ranges of motions now in my shoulders, hips and spine that I haven’t had since I was a kid.  I know I am, and always have been lactose and gluten intolerant.  Took me 30+ years to figure it out – even though I spent my life stuffing that shit in my face.

I carry with me a sense of thankfulness and luck.  Things fell my way.  I met the right people at the right time in my life.  Most importantly I met Ian Tan, my strength and conditioning coach, co-founder and Program Director of Ritual, and dear friend.

I also carry with me a sense of panic.  So many people in my life are metabolically broken, physically restricted, and on their way to a premature death —- just as I was.

Ritual was built because what we know shouldn’t be a fucking secret.  It should be taught to you right after you learn how to do basic math in primary school. 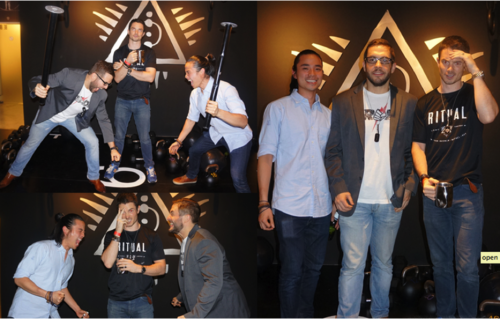 The Ritual corporate culture summed up in one photograph.

I am not genetically superior, nor is Ian.

You are not genetically inferior.

This blog, and all of the future posts come from the purest of places I’ve ever felt.  The knowledge is out there, but there’s a lot of bullshit.  Ian and I have spent a great deal of our lives trying to figure it out.

We want you to live longer

We want you to move better

Play with your grandkids – run circles around them till they collapse.

We want you to figure you out.

Much love – enjoy the journey.